This past week I can actually say that crafting wasn't something that really got accomplished.  I thought that I was going to have time before Christmas to sit and enjoy an evening or two just crafting but that didn't work out as planned.

I was able to find little bits of time since the 20th to craft but I haven't been able to get a lot of stuff accomplished.  The baby hats are still something that I can work on and they do make me happy because they don't take me long to finish so I can see some progress on something.  The pile of baby hats were mostly made over this weekend when I was sitting as a passenger as we did some running around on Boxing Day.

The baby afghan is a project that I started last Monday and I haven't been finding a lot of time to work on it either.  I would like to be able to get this one done quickly but will have to see what this week has in store for me. I know that I am going to be working some of this week so crafting will have to be done when I can fit it in and I hope to be able to do that at some point.

I am always thankful for the time I can find to craft.  It may be a half hour sometimes but at least my crafting is how I relax and think a lot of various things through.  While I don't find a lot of time to craft I am very thankful that I can crochet quickly because when I do find the time I can actually see some results.

So it is now time for me to get a couple more things accomplished.  Today is still a holiday for a lot of businesses but there are some that took last Thursday off instead.  Now it is off to get a bit of stuff done today.

Posted by Darlene at 9:18 AM No comments: 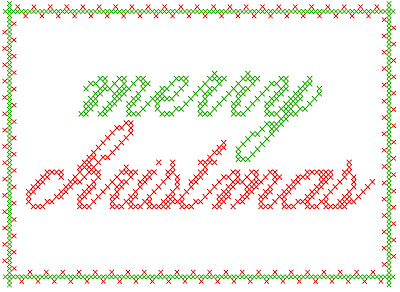 Wishing everyone a Very Merry Christmas.

Stitching and some progress

This last week I was able to find a bit of time to actually sit and stitch which felt very good. The stitching was actually done on the weekend when I sat down and didn't think about all the various work projects that I should be working on.

Saturday was when I finally was able to get the cape finished and I have to say that I am so happy to know that is finished now.  I am now starting to see the face appear and then I have the hair to complete on this project. I am looking forward to seeing that the Lady looks like when she is finished as it has been a project that I have been working on for a while now. (Started September 6th)

I had another project that I wanted to start this weekend and it was Blackwork Knight by Jennifer Aikman-Smith.  I have stitched this piece before but wanted to do it again so that is what I am doing. This time I am just using DMC floss instead of a silk and want to see what it looks like when it is done. I started working on the Knight on Saturday and have been able to get some of it done

It feels so good seeing that after spending some time this weekend relaxing and crafting that I was able to make some progress on two projects.  I don't have a lot of time normally where I can spend crafting so taking this weekend or at least part of it to cross-stitch felt really good.

Today, it is work so off I go to get some stuff off my desk and sent off to some clients.

Posted by Darlene at 9:05 AM No comments:

A bit of progress

This week I was able to make a bit of progress on Lady which was nice.

Of course, going to stitch night on Wednesday meant that I had some time where I was able to focus on stitching.  A lot of this area was completed then but I did find a bit of time to stitch yesterday as well.

I have been trying to find little bits of time to sit and craft.  I would have loved to been able to work on this piece each night last week but the rest of life got in the way.

This week is going to be another week where I will see when I will be able to stitch.  This coming weekend I am going to try and spend some of it stitching as I would like to see some changes to at least one of my projects that I have on the go.

Hopefully I will be able to spend some of the holidays also stitching.  I am not sure how much time I will really have as work will still need to be done during that time. Work never goes away but there are times when I need to take an evening to myself to craft and relax.

I haven't been able to spend a lot of time crafting but when I can find that little bit of time I really do value it.  My crafting time is my way of relaxing and thinking through some of the things that I am working on.

Now it's time to get to work and answer some of those emails that need my attention.

Posted by Darlene at 9:29 AM No comments:

I was recently told that all I do is Craft and blog about it. Boy, do I wish that I had the time to just craft and blog. My blog and crafting are an escape from my work which is what I do during the day. My crafting is something that I do in the evenings when I have time and sometimes on the weekend. If I could craft more I would have a lot more accomplished.

What I did was a bit of an analysis to see what I could accomplish if I was able to craft a minimum of 35 hours a week.

Baby hats:
If I was able to crochet 35 hours a week I would be able to keep quite a few hospitals supplied with baby hats but I don't have that much time to crochet.

Reality: in 36 days I was able to finish 47 newborn and 15 preemie hats so I crocheted around 36 hours on hats or roughly an hour a day.

Baby afghans
This is making an afghan approximately 32” x 42” in size and doing the v-stitch pattern that I don't need a pattern for.

Reality: in 36 days I was able to finish 68 rows on an afghan so around 13 hours of crocheting on the afghan.

Cross-stitch patterns
If I was able to cross-stitch more than I currently do I would have had a minimum of 12 patterns designed, stitched and released this year instead of the 1 that I was able to release.

Reality: This one is very easy in the month of November I stitched 5 hours on a pattern so not a lot accomplished.

Now what you can see is if I was able to spend more time crafting I would be getting lots and lots of craft items finished on a weekly and monthly basis. Of course, people see me crafting on a weekend and think that is all that I do but in reality the weekend is the only time where I can find time to escape from work.

Now that I have explained that I don't craft all the time and I do have a job that requires my time maybe people will understand that my crafting is my hobby.

This week I finally was able to make a little bit of progress on my cross-stitch.

Yesterday I decided that considering I hadn't picked up any of my cross-stitch since early in November that it was time to try and put a bit of effort into at least one of them.

Schlock with Gun was the closest to being finished so I decided that it would be the first one that got my attention.  I pulled it out finally got it finished which made me very happy.  It does feel good being able to see another project finally finished.  I have been working on Schlock since August 1st but it wasn't the only project that I was working on so at least now it is finished and I am happy with how it looks.

Of course, one day and still lots of projects on the go but at least a little bit of progress was made.


After finishing Schlock I pulled up the black butterfly that I started on October 4th. Again, this is a project that has been put aside and not looked at since the end of October.  I didn't make as much progress as I would have liked on it but at least I was able to get some done so that did make me a bit happier.

Both Schlock and the Butterfly were worked on during the afternoon yesterday while I sat and watched the Canada Cup Women's final for curling.  It meant that I was able to get something done and that was good considering how little crafting I have been doing over the last couple of months.

After dinner while I watched about an hour of the hockey game I pulled out Lady and she got a little bit of attention as well.  The part of Lady that I am working on is just simple fill in so that meant that I really didn't have to focus on it.

Now that I have been able to get a bit of cross-stitch done I am going to try and work on at least one of these projects for a while and see how much of it I can get completed.  It was nice having a bit of time yesterday to craft and not think about work.

I did finish a few more baby  hats but those are normally done while sitting after dinner chatting with DH or while a passenger in a car. The baby hats are something that are great when I only have a little bit of time to craft in the evenings.

This week I am hoping to be able to find some more time to craft because I have missed doing it.  Of course, I have a lot of things on my plate so I am not sure how much time I will be able to spend on crafting but I am at least going to try on Wednesday evening to work on a project for a while.

So now it is time for me to get some work done as I have lots to do.  Being able to do a bit of cross-stitch felt very good yesterday because I haven't done any since the 11th of November.  Maybe now, I will be able to find little bits of time in the evenings to craft again.