I really don't think hot, humid weather and crafting go too well together.  This week the weather has been extremely hot and humid so my crafting has been down a bit.  I have to say I haven't got much done of anything because every time I thought of doing something it involved moving and it was just too hot to do anything except try and stay cool.

I am still working on the various small projects like mittens and hats so should be able to post some good results by the end of next weekend.  At least I am hoping that I have got quite a few done in July.  I am working hard at reducing my stash of yarn because I know that I have way too much and last weekend I picked up more so it needs to disappear soon into projects.

This week I am hoping that I can get caught up with the work that is outstanding and then I should be able to relax and craft over the weekend.

Well it's a bit cooler today so I think I am going to try and pick up a crochet hook for a little while and work on either a baby hat or the scarf.  I want to get the scarf done by next weekend as I would like to give it as a gift to a friend of ours.
Posted by Darlene at 11:01 AM No comments:

Last night a bunch of us from Gitta's went to Stitch 'N Pitch 2011 at the Blue Jays game.

It was a lot of fun and have to admit that I think a lot of the stitchers got some of their stitching done but considering the heat (32C) it was a little difficult to concentrate on what you were doing.

This is an annual event with the Blue Jays but this is the first time that I attended and have to admit that I am already looking forward to going next year.  Yes I am a baseball fan so maybe that has something to do with it.  Also being able to sit and stitch during the game was great and of course no one complained about someone stitching while waiting the game.

Some of the teasing ended up on me because I took a scarf to work on that I can do without looking at the work so was able to watch the game while also getting some of my scarf done.  One of the girls asked me if I could stitch any faster and of course we joked around about that because with the heat I was a little slower than I normally am. 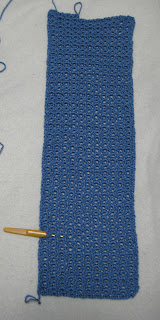 There were also some prizes given away for those attending and the lady beside me won one of the prizes and Kathrin also won a prize which was great.

My scarf did grow in size from when I took it out at the game.  I had 5 inches done before the game and by the time the game was over I had completed 26 inches.  I still have 34 more inches to go on the scarf but am happy with what I was able to do.  Now to see when I finish this scarf because it is hotter today than it was yesterday and it is really hard to even think of doing anything.


Hope everyone is staying cool.
Posted by Darlene at 10:30 AM No comments:

Time is going too fast

I just looked at my blog and noticed that I have been missing for almost two weeks.

Part of the reason is I have been attending some work conferences and also been trying to get some work stuff off my plate so that has been keeping me busy.

I am also determined to make a dent in my yarn stash so now to see what I actually accomplish.  I figure that this month is a good month to see what I can make for the charity near me, so that when they need something I will have some stuff ready for them.

I am really trying to get some sweaters, hats, mittens and scarves completed before September so will try and post the results at the end of July and August so that I can see what I have done.
Posted by Darlene at 11:24 AM No comments:

It is hard to believe but June is gone and it is now July.

As I write this I am sitting outside trying to enjoy some of this weather. I have been knitting quite a bit lately but don't have lots to show unless you want to see parts of things. I have been working on quite a few projects but not completing any. Currently I have half a children's swather knit and two mittens but of course the mittens are different colours still waiting for their mates.

I think I need to sit and focus on these projects for a little while and maybe make some progress on getting them done. Oh, did I mention I have also started crocheting a lapghan together so it is a UFO as well.

Maybe it's time for me to get off the computer and spend some time knitting. Oh, does anyone know a simple toe-up sock pattern? I have some yarn and want to try some toe-up socks.

Well off to knit for a while and enjoy the quite of my area while it lates.
Posted by Darlene at 1:23 PM 1 comment: