I am still around but have to admit that life just keeps me so busy right now that finding a little bit of time to sit and write has been difficult.

I have a few things that I want to blog about so I know that I need to sit here at the computer for some time and get everything written up. 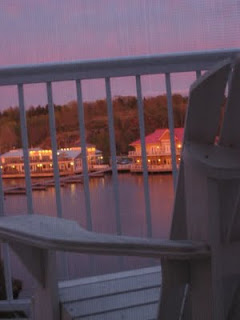 Here is a picture that I took last week during an escape that we took to Gravenhurst.  This view is out of the living area door of our suite and yes it is a Muskoka chair that is in the foreground.  We had a wonderful trip and I want to write more about it as it was a fun and relaxing trip.

Well off to try and finish up some work that I need to do before a meeting this evening.
Posted by Darlene at 11:21 AM 1 comment:

A bit of progress

Well things again are keeping me extremely busy.  Of course I got all the hats completed and now there are two programs running at the same time so am trying to get hats done for the two programs which means 30 hats by the end of June.  I think I should be able to get them done if I concentrate on them for a few days and see how it goes.

As for Crown of Squares I have been able to get a bit done and here is where it currently stands.
This coming weekend is a long weekend so I hope that I will be able to make a bit of progress on it then.  I also have another cross-stitch that is waiting to be started but I have decided that I am not going to start it until this one is finished.  Yes I am determined to get this one done quickly as I really want to start the next one that is sitting waiting.  The next one I just picked up last week at Gitta's so instead of working on other pieces that I have already started I am going to start this one.

Now to go and see if the rain will hold off for today as I want to get some walking in.  Will post more about these last couple of days later this week.
Posted by Darlene at 9:35 AM 1 comment:

I have always said that I was going to try new things and now I am trying something that I did years ago and stopped doing.  Yesterday I picked up some drawing pencils and a couple of sketch books so am going back to try something I loved doing years ago.

I am not a great drawer but I do enjoy losing myself in some of this activity so want to try again.  I know people say you can always just take a picture of what you see but sometimes there are images in your mind that you want to try and capture so that is what I am going to try and do.

No, I will not be posting pictures here for a while of what I am drawing but at least I am moving forward in trying to find who I really am.  I love creating things and hope that even with the sketch book I will be able to sketch out a few ideas even if they end up as cross-stitch designs.

To everyone that has something they want to try, I would say why not give it a try.  You don't have to show the world your results but at least you will know you tried.  I am lucking to have a support system that is always encouraging me to try things and also make sure I have all the supplies that I need to try the new thing.

Here is a quote I saw a couple of days ago and it made me think.  "Life isn't about finding yourself.  Life is about creating yourself.", George Bernard Shaw.
Posted by Darlene at 12:02 PM 1 comment:

I know I have been missing for a week now but I have been extremely busy knitting and trying to get the 16 hats completed by May 5th.  Now to explain, I do not have a knitting machine so all the hats are being knit by hand.

So as you can see in the picture I have completed the 16 hats that I wanted to get done for a local charity.  The hats didn't really take me as long as I thought they would.  The hats are to fit 4-5 year old children that will be entering school for the first time in the fall.

I started this project on the 21st of April and completed the last hat on May 2nd.  I am very happy that I got them all completed and my mom actually knit two hats for me so that if I needed them I could use them.  They are in a separate spot right now to be used to help meet future requests from this charity.

Did I really think I would get them done ahead of time?  No, I didn't because once I realized that I had to knit over a hat a day I thought that I was crazy even thinking I could meet this goal.  Having hockey games, baseball games and the Royal Wedding on TV did really help me focus on getting the hats done.  Also having a husband that understood that I really wanted to try and get the hats done also helped because when I was getting closer to finishing he would just say "stitch, stitch, stitch" to make me laugh and I realized that he was happy to see me doing something that I truly love doing.

My passion is my crafts as well as writing so being able to lose myself in my crafts has felt good.  Now I need to get back to Crown of Squares and see how it goes.  It won't be finished by stitch night next week I know that for sure but at least I should be able to get a little bit more done.

Off to work on some documentation that I want to finish up and also to catch up on a few other things that need my attention.
Posted by Darlene at 10:42 AM 2 comments: