Yes I love buying yarn and this weekend was another one of those trips. I headed out to purchase one ball of yarn for a baby afghan and like usual ended up with more than that ball.

I have been looking for a ball of yarn for a while and of course I know think it has been discontinued as I cannot find it. So instead of leaving the store without anything I ended up picking up four balls of baby sports weight yarn for a couple of baby afghans. The nicest thing about this yarn is that it works up quickly so it shouldn't take me long to finish the afghans that I want to make. I have started one of the afghans so will see if I can have it finished by the end of next week.

Tonight I heard that one of the guys that we know just found out that his wife is expecting a little girl. I am now sitting here figuring out what colour afghan I should make for the two of them as I would like to give it to him before the end of August as the baby is due in November. I guess I should just look through all my yarn and see what I have a start an afghan otherwise I won't get it done.

Things are going along pretty good with my main project as well as I have been getting some items finished for the soldiers. I want to drop off another delivery to them in August so need to sit down and finish up a few of the items that I just need to sew together.

Now to just sit down and work on finishing all of these projects that I have started. I guess my project lt is going to grow a little bit if I start another baby afghan but that's OK.

Yes another project on the go and some projects are going to be left for a while as I work quickly on this new afghan. Off to workk on the afghan and hide from yet another thunder storm.
Posted by Darlene at 9:18 PM No comments:

Well my wonderful husband keeps teasing me that I leave little bits of yarn all over the place. I know that sometimes I do lose the occasion piece that has been stuck to me.

When I crochet in the car as a passenger I know that I get the fluff off the yarn all over the car sometimes. The best one was when I was using red yarn and it was flying all over the black interior of the car. It did leave a rather interesting layer on the dash board. Sorry dear.

The latest incident had both of us laughing rather hard. We were away for the weekend and of course I had my crocheting and knitting with me. I carried my bag back up to the apartment and that was the end of it for the day. Little did I know I had lost something.

The next day we went down to the parking garage and when walking to the car I noticed something on the ground. It just happened that when I was carrying my knitting bag back upstairs I dropped something. There on the ground in front of me was a one round granny square which I had made the day before. It had probably been run over a few times but it didn't look like it had so I picked it up and it's now a six round granny square.

So please remember that you may lose some of your craft spore anywhere.
Posted by Darlene at 10:46 PM 1 comment:

Yesterday was a day for me to get together with my online friends from a group that I belong too. I have to say that it was wonderful even though it rained late in the day. There was about 26 of us that got together and it was a lot of fun. The laughs that we all shared was wonderful as a lot of us had not met until yesterday but we were like a family.

The group does knitting, crocheting, quilting and sewing for charity and most of the items goes to various charities around Canada. The get together also gives all of us a chance to give the other people the items that we have made for their charity. I am now one of the coordinators as I collect the items for the troops and it was such a good feeling receiving all the items that I did yesterday.

This year an american charity also chose our charity as their June project so a lot of items were received from them.

These are the pictures of the items that I received for the troops yesterday.

This picture is of the items that I received from the American group. 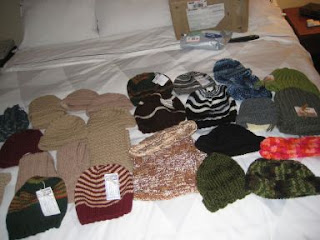 Here is what I received from the group of women that were at the picnic from our Canadian charity. 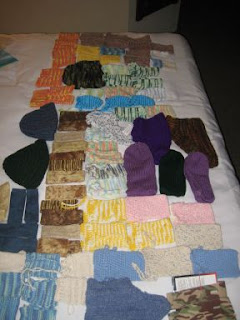 Well now to finish up all the items that I have on the go for the troops so that I can sit and get them all ready to deliver.
Posted by Darlene at 10:56 AM No comments: